Having recently come into possession of a DSLR, and with the weather being like this (i.e., wet), I've been thinking up what kind of photos I could take, at home, that I couldn't have taken with the old non-interchangeable lens camera. One such category is macrophotography with a reversed lens mounted in front of a regular one.

To summarize, the idea is to take a telephoto lens, a second lens with a shorter focal length, and connect the two with an adapter ring that attaches to the filter threads of both lenses. Allegedly, this should result in a magnification that is approximately equal to the ratio of the two lenses. For my pair of lenses (Canon EF 55-250mm f/4.0-5.6 IS STM and Canon EF 50mm f/1.8 II), that should theoretically be anything from 1.1x to 5x. However, only the far end is really usable, so the magnifications are... large. By way of comparison, a "regular" macro lens has a magnification of 1.0x, and non-macro lenses typically range from 0.1x to 0.4x.

(This is just one of several ways of doing "DIY" macrophotography without a dedicated macro lens. Other ways include things like extension tubes or mounting a reversed lens directly on camera. For details, see your favourite search engine.)

so does it work in practice?

The 55-250mm lens has a 58mm filter thread, while the 50mm has a diameter of 52mm. Reverse rings are available for all kinds of size combinations, but thinking of potential future filter use, I ordered a 52mm/58mm step-up ring and a 58mm/58mm reverse ring for a couple of dollars from eBay. Of course one of them (the step-up ring) arrived all bent out of shape and with a dent in the threads, so I was forced to try out the concept with the kit lens (Canon EF 18-55mm f/3.5-5.6 IS STM) in place of the 50mm prime. The resulting combination was really unwieldy, and had a lot of very bad vignetting at all possible focal length settings, presumably due to the small aperture of the 18-55mm lens.

After getting a replacement step-up ring... well, the combined lens pair is still really unwieldy (though not quite as bad, since the 50mm is significantly smaller and lighter), has vignetting except when the 55-250mm lens is set to >200mm (meaning a lower bound of >4.0x for magnification), and only focuses at working distances of around 3-5cm. The depth of field is ridiculously narrow, even with the 55-250mm stopped down all the way to f/32. So it's in no shape or form a practical device. The resulting image quality (whether due to difficulties in focusing, or diffraction from the f/32, or something else) also leaves something to be desired. It's undeniably fun, however.

Based on some back-of-the-envelope calculations, I believe the system is capable of resolving detail in the scale of 5 µm, so calling the contraption a "macro lens" is perhaps a bit misleading. Theoretical lower bound derived from field of view, distance of the plane of focus and sensor resolution is somewhere around 0.9 µm, but that's patently ridiculous. 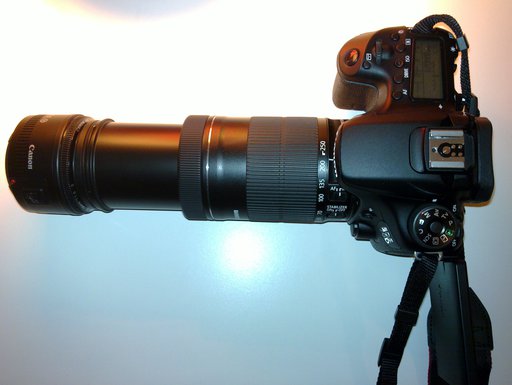 That's a tiny Raspberry Pi resistor and capacitor; surface of a flexible safety reflector; and a dent in a step-up ring, respectively.

Well, there are some 1960s M42 screw mount manual focus lenses (Super Takumar 1:2/55, Super-Multi-Coated Takumar 1:2.5/135) complete with an extension tube set that I might get to borrow. Combined with a cheap M42-to-EF adapter, that might be a nice way to get macro shots that are a bit less... macro.

Will continue the series with a "part 2" if that ever happens.